One morning Fred brought the filly out to jog. He waited for Harry to help him hook her to the cart but his partner was in the stall brushing off the colt to get him ready to go out next. Old Fred stood there patiently, not saying a word, yet you could see him start to simmer.  Harry was in his own world as he whistled away as he braided the colt's foretop and Fred could wait no more.
"Are you g-g-gonna help me hook this filly," he called out, "s-s-sometime today?"
"Don't rush me," Harry drawled, "I work cheap, not fast." He turned towards Fred with a grin on his face, obviously pleased at his wit. In the blink of an eye the colt reared up and cuffed him with a hoof right alongside his head. The hat and glasses went sailing as Harry spun around and sort of pirouetted like a ballerina out of the stall and across the shedrow. He bumped into two trunks and three harness bags before crumpling in a heap and landing in the pile of sawdust outside the barn door that had been there for 25 years.
Fred looked at Harry lying spread-eagle on the sawdust and harrumphed.
"Are you gonna h-h-help me hook this filly," he stared at him, "or are you gonna f-f-f-fool around all day?"
Harry sat up and rubbed the growing bump alongside his noggin and let out a long sigh.
"I will," he calmly said, "as soon as I find my glasses."
"I think Nellie got hold of them," Fred said as he looked in the barn.
Harry quickly jumped up and raced back into the shedrow.
"Let go of them, you damn thing!" came his voice.
They spent the next hour chasing her around the stable area before they finally got them away from her.

And if it wasn't for teamwork, they never would have caught her. 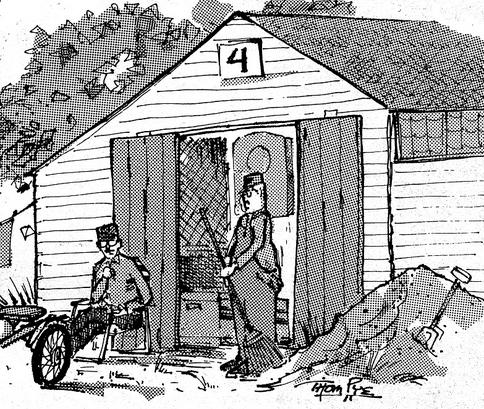 They say that opposites always attract. It's true in nature and it definitely happens in the horse business. At just about every track throughout North America there's a scene reminiscent of Neil Simon's The Odd Couple as folks go about the daily chores that are associated with operating a stable.

One such team was located at one of those smaller tracks that dot the many Fairgrounds throughout the northern states. They were both in their seventies and each had a family - yet to this day - I don't think they ever introduced themselves to each other. That's just the way of this business.

They always had at least four horses: two race horses that were constantly in over their head with a colt and a filly that seemed as if they were forever in training. The barn was the same one, year in, year out and was referred to as "Harry's and Fred's barn" around the track.

The two got six stalls every Spring: four for the race stock, one for a tack room, and an extra for the imaginary claim they were going to make every meet. It ended up being occupied by a flea-bitten old goat they had that didn't get along with anything but a feed tub. "Nellie" would be the first thing you'd hear when you walked into the barn, followed by the feed bin being raided as she knocked over the buckets, and Harry hollering at her to "leave that alone, you damn thing." That was about the only time Harry would raise his voice. He wasn't too fond of her.

It seemed as though they'd been partners since time began and both were pretty much set in their ways. Harry was the less excitable of the two, preferring to sit in front of the barn in a lawn chair, smoking a cigarette, as he rambled on about "the Big Horse" that they had "a few years back." You could've set a firecracker under that chair and all he would've done was flick the ashes off his cigarette and ask you "why in hell" you "did such a thing?" Nothing really ever bothered him.

Fred, on the other hand, would get perturbed if a hopple hanger wasn't in the right place. He'd spend hours looking for "the filly's" shadowroll even though there were half a dozen others available.

"She needs that yellow one," he'd say. "The one with the cheek pieces turned up. I can't jog her without it." Then he'd start tearing through three or four trunks looking for it. After a half hour he'd be all red-faced and flustered. He never cussed but you could tell he wanted to let loose a few choice expletives. Instead Fred would stand in the middle of the shedrow and holler at Harry, demanding to know what he'd "done with it!?!"

That's when he took to stuttering.

Harry would just turn around in his chair and tell him to "calm down."
"Take it easy," he'd twang. "It's in with the colt's harness. I used it on him yesterday. He was duckin' shadows over by Howard's barn so I put it on him."
"H-h-he don't n-n-need a shadowroll," Fred would complain. "He's shyin' away from that stereo those kids got blastin' in the the b-b-barn. You should’ve put some earplugs on him. He don't need a sh-sh-shadowroll."
"He needed a shadowroll," Fred would shoot back. "I went a mile in '40 with him and he was perfect and you can keep your earplugs."
"You were supposed to go a mile in 2:45," Fred muttered as he calmed down and went back into the barn to get the shadowroll. "I shoulda gone with him myself," he added under his breath. "I get along with him better than you."
"Then go with him," called out the keen-eared Harry. "See if I care when he hops over the fence. It'll teach you right!" He'd settle back into the chair with a smile and wait for the next problem to develop. That would be about the extent of them too.

They didn't have any particular system set up: one would get the joggers ready while the other would ride. They took turns, each doing what they fancied for the day. Rarely did you see them training in sets - which everyone was a bit thankful for - one of them was enough on the track at any one time.

The night they raced they'd always be an hour early before anyone else. Start warming up early too. That was a sight in itself: their faded set of colors had to be at least forty years old, complete with a broken belt buckle that would come undone and dangle furiously in the wind as they went a mile, their chipped and yellowed-with-age helmet was fastened by a piece of strap from an old stud support that they found in the trash. They were quite the pair yet, aside from their eccentricities, they did alright.

Every day during the summer right around noon, Fred and Harry would host a group discussion at the barn about the various problems with the horses and the world. Fred would be scurrying around straightening up the barn and putting his two cents worth every so often while Harry would be sitting in his chair, listening intently, before offering any of his sage advice. There was never any lack of audience as the season drifted slowly along.