No matter how many times you get to the Winners Circle this is one of the Special Ones. 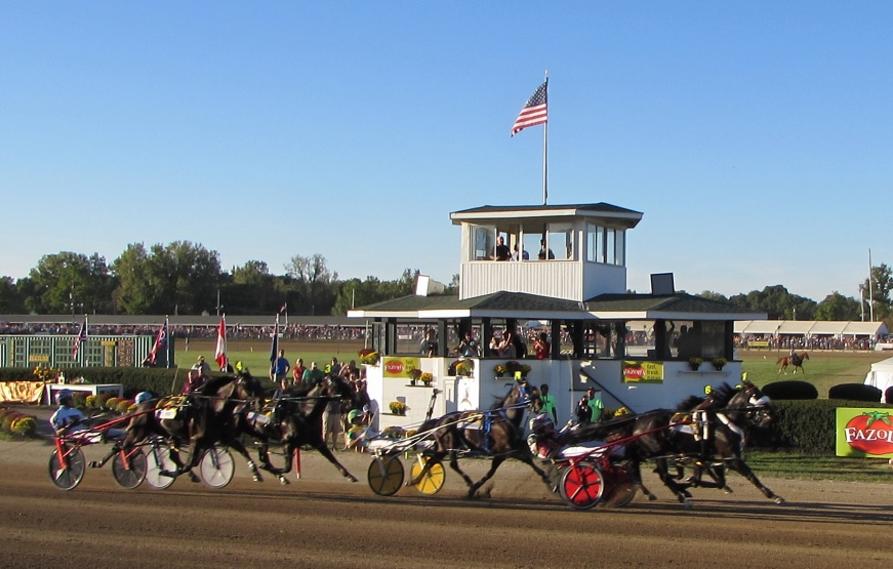 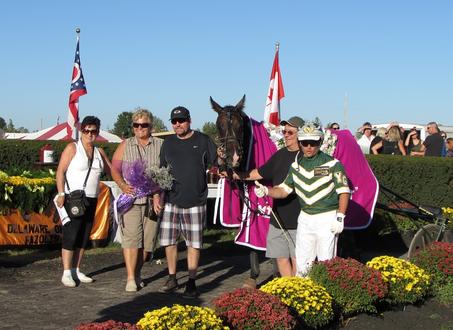 Pluggy's Puns...
Bourbon St. Hanover is type of horse that drives you to drink...

just about every week

"Sometime not worth plug nickel."

This year's Number 1 rated three-year-old pacing colt Wiggle it Jiggleit joined his impressive stablemates with Team Teague as he arrived Monday at the Delaware Fairgrounds. The winner of over $1.4 million in 2015, he is the favorite in 2015’s Little Brown Jug. The World Champion son of Mister Wiggles is The Pride of Indiana. 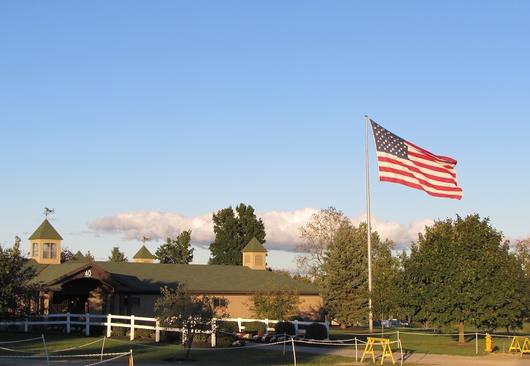 WIGGLE IT IS IN THE BUILDING!

"Sometime not worth plug nickel." 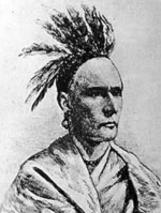 For complete and official results visit

As Sunday's victorious 11th race group headed over to the Winners Circle for the trophy presentation by Peter Gerry in the 2nd division of TheBillings Amateur Trot, owner Kelly Walker grinned that "it makes the whole year just to hear Roger Huston call out:

Sunday will never be the same...

A Chair to Remember... 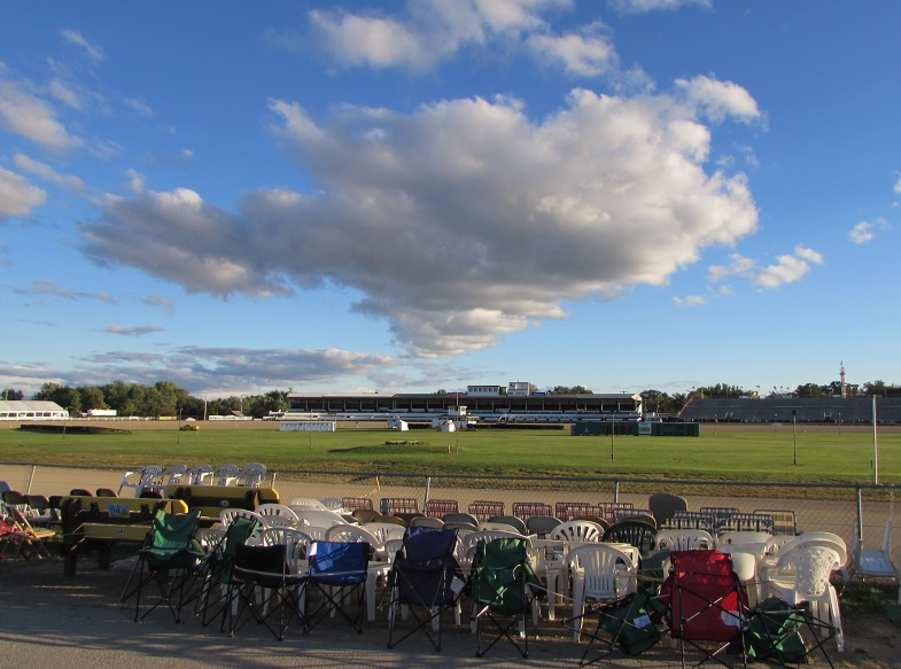 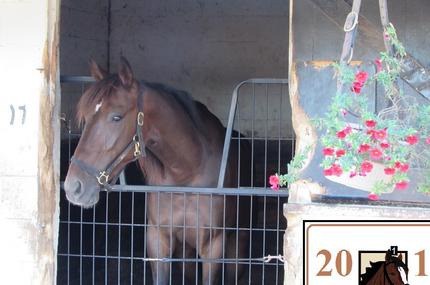 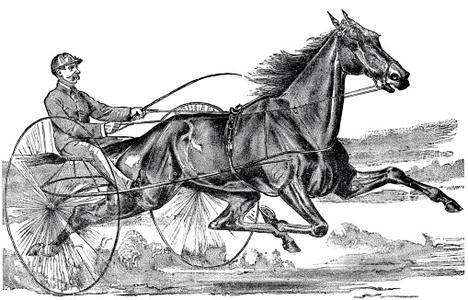 Ruth Levings Monte & her mare Lady Blaze, who she would have for over 30 years.

Ruth [on right] and fellow 4H member Marilyn Evans in front of the Judges' Stand during the National Anthem in 1957. 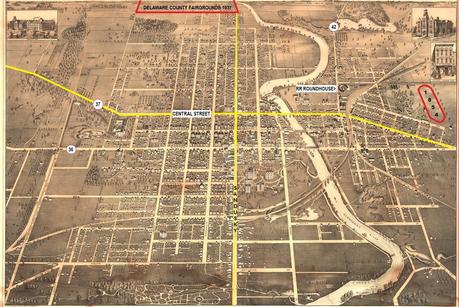 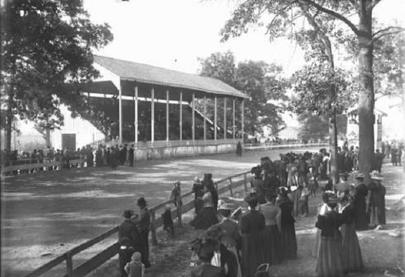 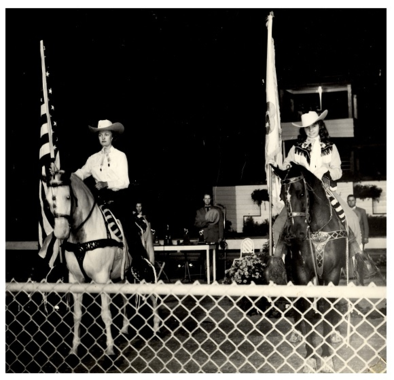 In 1946 future Harness Hall of Famer and Delaware native Wayne T. "Curly" Smart won the very first "Jug" with Castleton Farms Ensign Hanover. Each year since, on the third Thursday in September, another grand spectacle occurs once more.
In 1957, when a colt named Torpid gave master horseman Johnny Simpson Sr. the second of his three Jug winners in five years, a young Ruth Levings was an equestrian member of 4H at the Fair who proudly held the Ohio State Flag as the National Anthem was played during the opening ceremonies.

And in 1958, the year Shadow Wave took the trophy for Canadian Legend Joe O'Brien, Ruth married her high school sweetheart Gene Monte.
This year Ruth and Gene Monte will be at the Fair again... with their grandchildren and great grandchildren.
As were her parents and grandparents and great grandparents before her. This is their ninth generation of Fairgoers.
It is after all... a Family, a Fair.

Agricultural Fair Milo D. Pettibone [1793-1842] which the Fair Board purchased the acreage from his heirs in 1854.

Ruth recalls how her parents would fondly talk about "the old Fairgrounds" as they sat on their veranda on a warm summer's eve. It is shown prominently on the 1890 map of Delaware.

In 1937 The Fair moved to Pennsylvania Ave. which is about 1 1/2 miles west across the river "as the crow flies."
Since 1926 trotters had vied for their top prize in the Hambletonian in New York.  Delaware natives Joe Neville and "Hank" Thomson came up with the idea in early 1945 of an equally prestigious race for pacers. It was to be called Little Brown Jug, after the champion pacer of the 1880's who had been named after the popular Civil War-era song of the same title: "Ha ha ha, hee hee hee ...a little brown jug for you and me."

Small beginnings.
But it was an instant hit as folks could come in from the countryside and visit with friends as well as show off their produce and animals. The site of the Agricultural Fair sort of floated around town over the next several years.
Meanwhile, down in Cincinnati in 1838, they had races over "the Buckeye Course" and, while they were not too organized, they were so popular that the very next year Ohio hosted 15 other racetracks. The Delaware County Fair was moved to Powell, 10 miles south and just north of Columbus, and its racetrack for a number of years.   The first Fairgrounds with a racetrack in Delaware was located east of town on the north side of Half Street, now Fair Ave. It was the land of former Delaware mayor and the first President of the

Ruth was born and raised in Delaware as was her father Ben... as was his father Ira...

as was his father George. In fact the Levings were amongst the settlers that migrated

up after the War of 1812.    As villages began to emerge from the wilderness some grew larger than others.
Location, location, location.
The area was originally a Native American village the Whetstone River [now the Olentangy River] that runs through it. It was just north of the present-day center and it was home of the Mingo chief Plukkemehnotee. The fur traders couldn't pronounce that so they just called him "Pluggy" and the village was known as Pluggy's Town even after his death in 1776.
The first settler in the area was Joseph Barber [1776-1826] from Pittsfield, Mass. In 1808 Delaware was established as its wide tree-lined streets were laid out by its founder Moses Byxbe [1756-1826] who was a lawyer from Lenox, Mass. and surveyor Azariah Root [1761-1851] …Barber’s brother-in-law.
The Delaware County Fair began in 1834 and offered a top prize [for Best Stud Horse] of $7.00 while numerous others garnered $1.00 or $.50 cents for their jams and jellies and livestock.
It was first held at the County Courthouse in the center of town and people brought their cattle to a vacant lot next door. 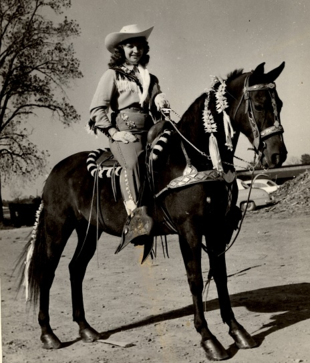 A Family, a Fair...
While Delaware County Fair's 2015 Little Brown Jug will be its 70th, Ruth Levings Monte notes that this will be her 72nd Fair that she has attended. She has fond memories of riding in the truck as a little girl with her father Ben Levings while he supplied all the sawdust for the animals at the Fairgrounds on Pennsylvania Avenue even before there was a Little Brown Jug.
That's where he showed her how to give a horse an apple with her little hand held out flat.
"Let them nibble at it and don't get your fingers in the way."
And that is where her love of horses began. 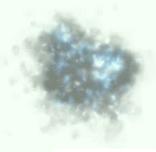 AND DOWN THE STETCH THEY COME!!! 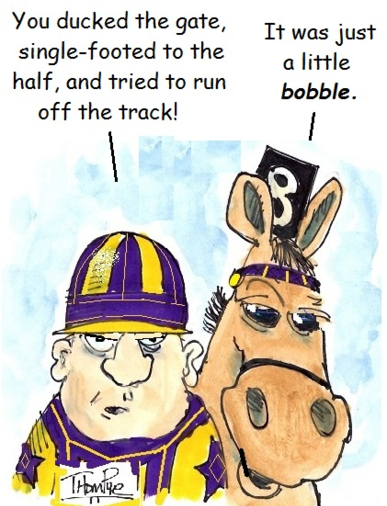 The Start of Something Good

The Final of 2015's Jugette field at the head of the lane as Starter Mike Woebkenberg expertly leads them away.

As we milled around The Jug Barn waiting for the colts to come out for the post parade two gals walked up that seemed to be bearing in a little bit and stopped short at the walkway.
“Do they have an ATM machine in there?” one asked.
“Over a dozen,” one wit answered, "but they’re only for the lucky owners.”

As tough and as game a horse as you will ever see, Wiggleit Jiggleit [Montrell Teague] in

an epic head-to-head battle against Lost For Words [David Miller] came back after being beaten in the stretch to win the final of the 70th  Little Brown Jug by a nose...

It don't get any better 'n this!

The show moves to The Red Mile...

They pass in front of the stands for the first time... three in, three out!​ 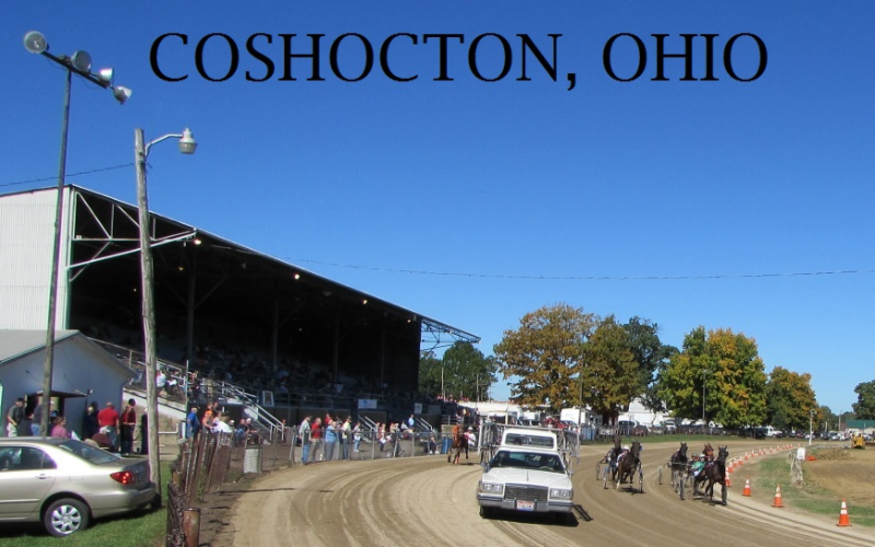 [Jeff Lieberman] enroute to a win in 1:56.2h over the Coshocton oval. It was a mere 2/5ths of a second off the track record and was the 7-year-old Western Hanover gelding's 15th victory of 2015.

They're at the head of the lane! 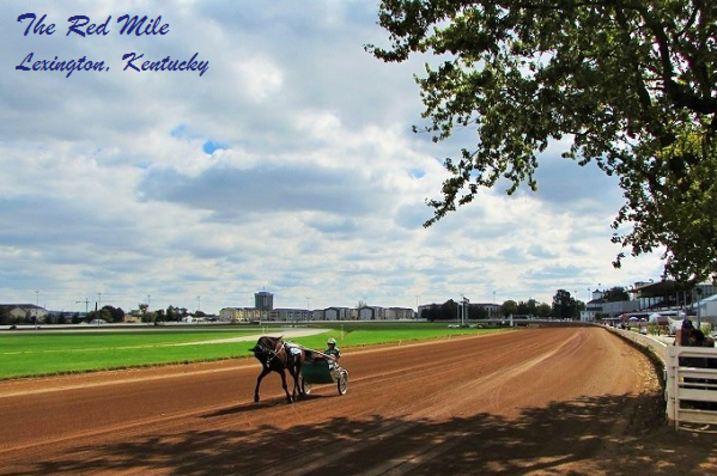 Tuscarawas County ["old town/open mouth"] was formed from Muskingum County in 1808 and named for the 130-mile long river.
Dover was the 2,000 acres purchased by two brother-in-laws from Maryland who settled here in 1806. The town became known as Canal Dover with the construction of the Ohio-Erie Canal system when opened in 1832 and operated up to 1915.
The first Tuscarawas County Fair was held on three acres of land in 1850. Since 1852 The Fairgounds have comprised 24 acres on its present site. During the Civil War it was home to Camp Meigs and the 51st Ohio Infantry which fought in many battles for the Union. Ironically Dover was also home to the Confederate guerilla fighter Capt. William Quantrill [1837-1865] a local n'eer-do-well who is not held in very high esteem.
Twenty miles south of Dover in Gilmore was the birthplace of Denton "Cy is for Cyclone" Young [1867-1955] the winningest pitcher in baseball history. 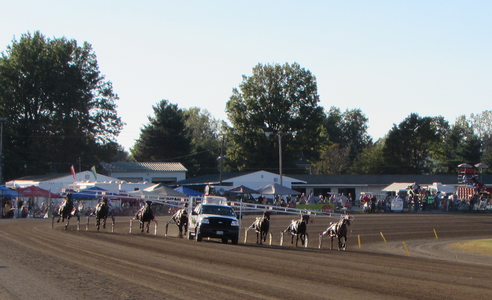 RETURNING NOW TO THE WINNERS CIRCLE...

Wiggle It Jiggleit...  a three-year-old son by Mr. Wiggles out of Mozzi Hanover, owned by George Teague Jr. Incorporated of Harrington Delaware, trained by Clyde Francis, Montrell Teague in the sulkyyyyy....

THE FIELD TURNS FOR HOME!

The $100,000 MS. VERSATILITY FINAL AGED MARES TROT was captured  in 1:54.2  by  the 7-year-old Windsong's Legacy mare Bax Of Life [Yannick Gingras] who went over the $550,000 mark for Ontario trainer/owner Jerry Duford and Joanne Wray. 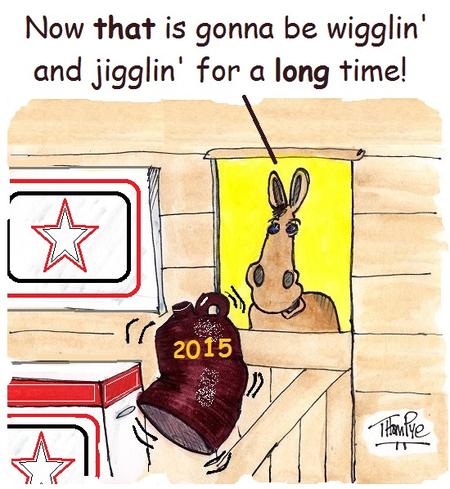 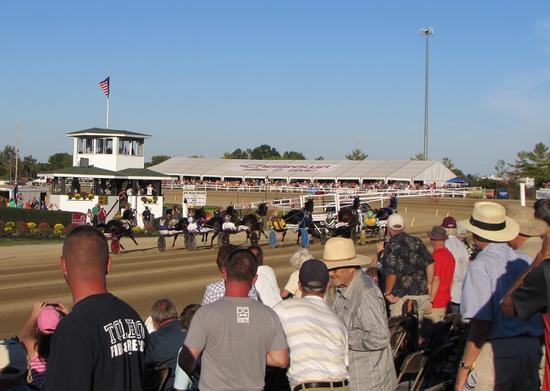 Coshocton is situated on the Tuscarawas & Muskingum Rivers and was called Coshhacksunx - crossing of the black bear - in the Native language. Originally a French fur traders' stone fort in the late 1670's, it became the principal Lenape [Delaware] village in Ohio in the 1770's. The local Lenape - "Men of men" - tried to remain neutral during the Revolutionary War [1776-1783] but it just resulted in their whole village of 700 being destroyed in 1781.
After the War Ohio was opened to settlement and the town of Tuscarawas was plated out in 1802. It was renamed Coshocton when it became the county seat in 1811.
The first County Fairs in the 1850's were held in the town square and had several sites throughout the village until the present 34 acres of land were purchased in 1872.
Always a center for racing - Coshocton had once been home to the famed stallion "Abdallah" just after the Civil War - by 1879 the County Horse Fair Association laid claim to 7,609 horses. 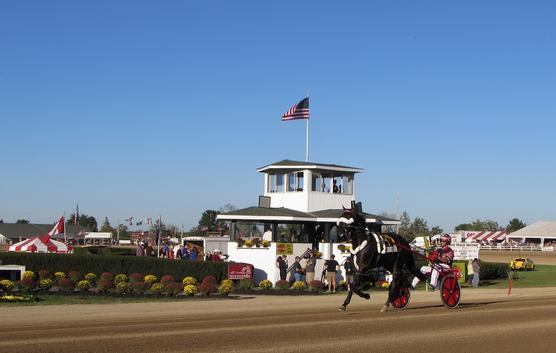 JOG BURGER IN THE JUGETTE! 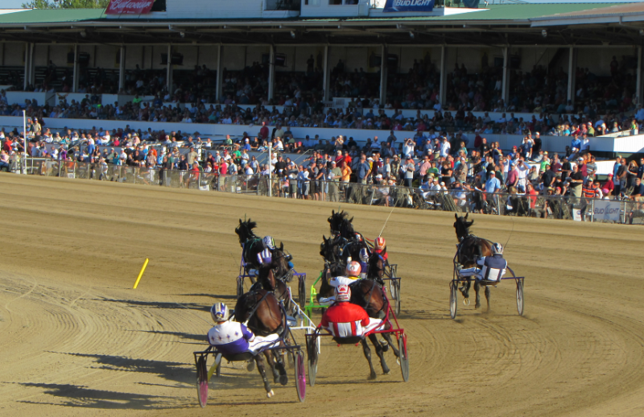 after he races you can walk in to the Clubhouse and say "Set up the bar!"

The Best five days of racing I've seen in my life... 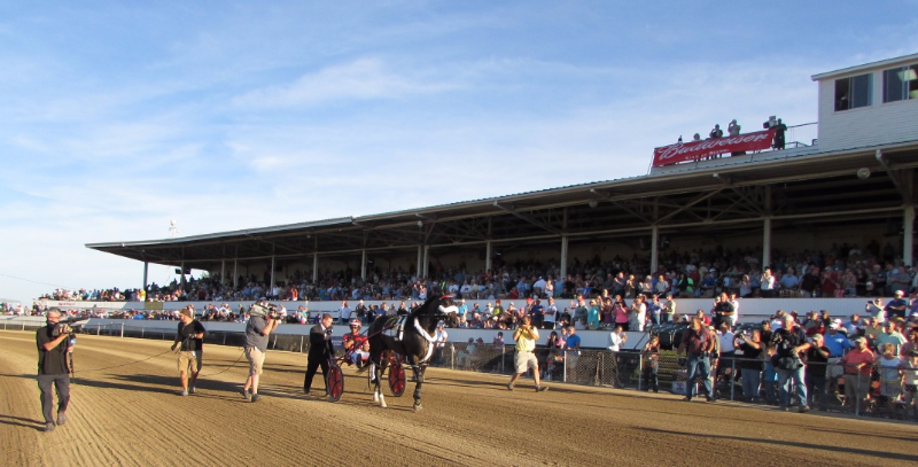 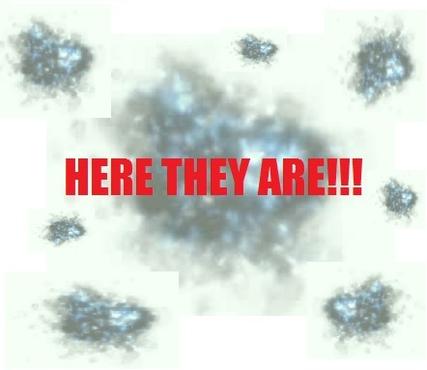 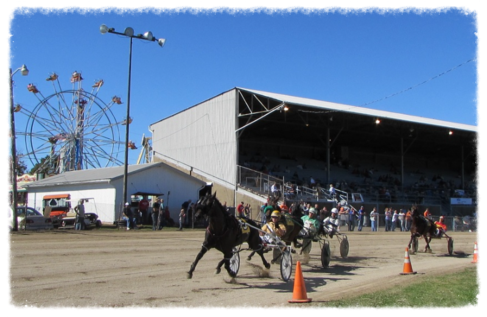 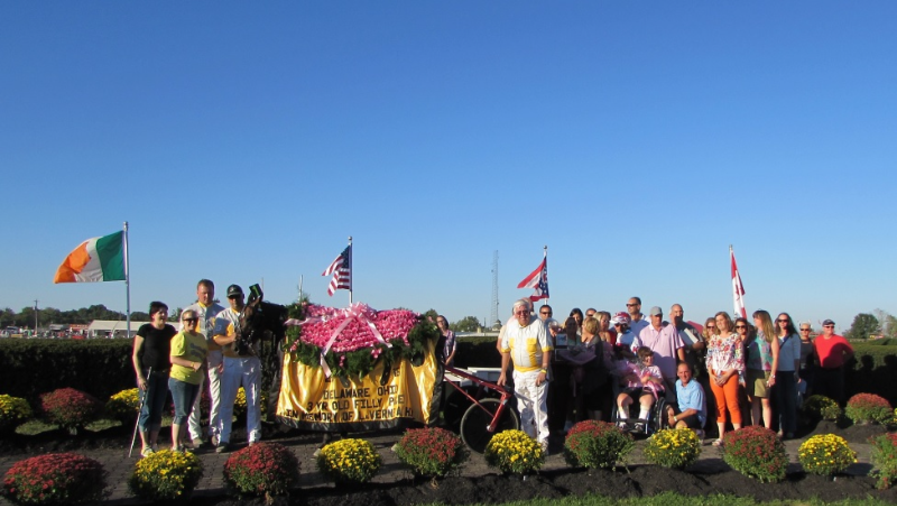 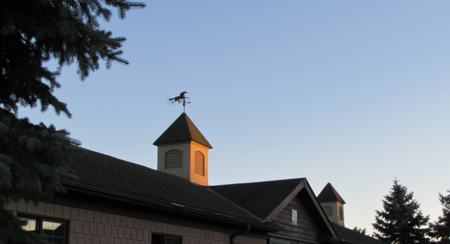 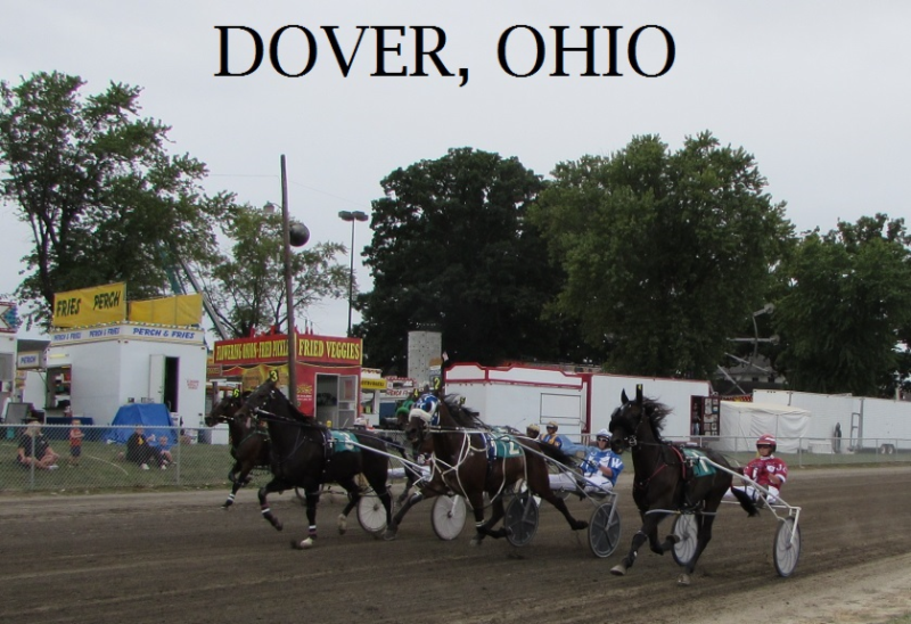 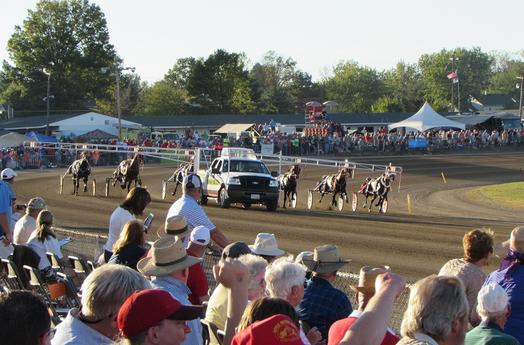 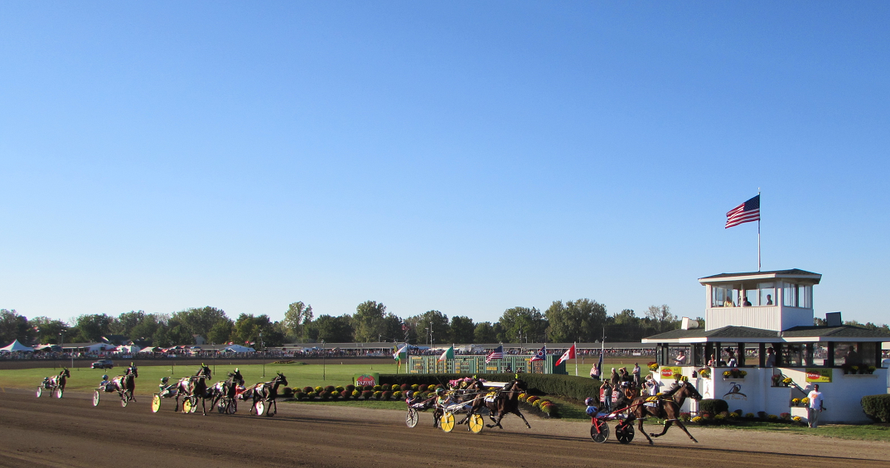 Sassa Hanover and Matt Kakaley stretches `em out in the stretch as she breezes home in 1:51.1. It was a 3:42 World Record for combined heats for the three-year-old daughter of Rock N Roll Heaven.